Here’s to hoping you all enjoyed the Labor Day weekend!

With a few weeks of school under our belts and the holiday weekend behind us, it’s time to settle into our weekly routine.  We’ll be using our writer’s notebooks and math journals daily for note taking, problem-solving, fluency activities, skills practice and more, so it’s important that you have both notebooks with you everyday.

It’s also important that you check your Schoology calendar daily to make sure that assignment due dates don’t sneak up on you.  (Be sure to read the assignment descriptions, which will tell you whether you need to submit your work, or whether I will check to see that it is done in class!)

This week in math, we begin investigating the concept of ratios–learning both the language used to describe a ratio relationship between two quantities and strategies for solving problems that involve ratios and unit rates.

In language arts, you’ll make you first attempt at writing an argument in The Case of Slip or Trip–weighing the evidence at a crime scene before drawing your own conclusions about what occurred, and then doing your best to craft an argument in which you make a clear claim, supported by evidence and reasoning.

We launched our study of ancient civilizations by walking in the shoes of paleontologist Don Johansen last week, doing our best to reconstruct the skeleton of his most famous discovery, Lucy, the remains of an early hominid fossil that turned out to be more than three million years old!  This week, we’ll take a closer look at the ways that early hominids adapted to their changing environments, including the technological advances they made with the aim of better understanding the developments that led to the first civilizations.

I enjoyed meeting you last week and look forward to the year ahead of us! 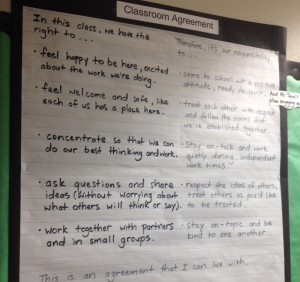 We devoted much of last week to getting to know one another and establishing norms for our work together this year.

It’s one thing to create a classroom agreement and another to live by it.  Yet, that’s exactly what I saw happening last week as the students jumped into learning, both problem-solving on their own and collaborating with one another. 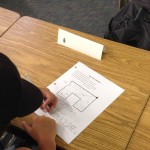 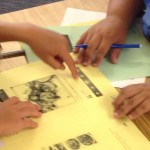 This week, we’ll dive a little deeper, completing the final two activities in the Week of Inspirational Math series and revisiting the problem-solving task that we began last week.

We’ll set up our writer’s notebooks and make our first entries; delve into the first piece of literature that we’ll be reading and discussing together (one of my favorites, “Eleven,” from Woman Hollering Creek, by Sandra Cisneros); and try walking in the shoes of an archaeologist as we do our best to reconstruct a skeleton.

It’s going to be a fun but busy week.  Take a deep breath.  Here we go!

Welcome to our class blog!  Check in here to read about and see highlights from our work together, as well as learn about what’s in store for the coming week.